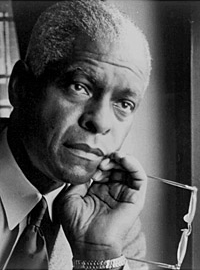 Dr. Benjamin Elijah Mays, was born in 1895 in South Carolina, and graduated from Bates College in Maine in 1920. He went to the University of Chicago for his master’s degree and doctorate, and while he was working on those degrees, he was ordained into the Baptist ministry. He taught at Morehouse College and at South Carolina State College. From 1934 to 1940, he served as dean of the Howard University School of Religion and then moved on to the presidency of Morehouse College, a position he distinguished for the next quarter of a century. He also served his community well, becoming the first black president of the Atlanta school board.

He spoke early and often against segregation and for education.  He received nearly thirty honorary doctorates and other honors and awards including election to the Schomburg Honor Roll of Race Relations, one of a dozen major leaders so honored. He had been a model for one of his Morehouse students, Martin Luther King, Jr., and he served the young minister as an unofficial senior advisor. He gave the eulogy at King’s funeral. Among his books were the first sociological study of African-American religion, The Negro’s Church, published in 1933; and The Negro’s God, of 1938; Disturbed About Man, of 1969; and his autobiography Born to Rebel, of 1971. These books reveal a combination of sharp intellect with religious commitment and prophetic conviction.

The American National Biography website has a comprehensive biography on Dr. Mays.